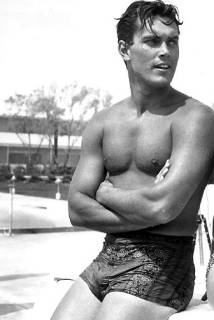 Jeffrey Hunter was born Henry Herman McKinnies, Jr. in New Orleans, LA.  He began acting while still in his teens in local theater and radio.  Hunter worked in stage productions at the University of Illinois, and later, at the University of California where he was discovered by talent scouts who were very impressed with the tall, blue-eyed handsome young man.
Hunter made his first major film appearance with a small part in the film-noir Fourteen Hours.   He went from featured roles to the starring role in the action film Single-Handed.  His breakthrough role came when he co-starred with John Wayne in The Searchers, a film directed by John Ford.  He won excellent reviews for his acting and the fact that he was able to hold his own with the veteran actor Wayne.  Hunter’s career continued to flourish in films such as The Last Hurrah, Sergeant Rutledge and Hell to Eternity.  He played Jesus in the Biblical film King of Kings to reviews that ran from praise to ridicule.
Hunter also worked in television with his own series Temple Houston among other appearances.
Jeffrey Hunter said, “I was told I had arrived when, during the shooting of The Searchers, they gave me almost as much ammunition as they gave John Wayne”.  Hunter died at the young age of 42 after suffering what was his second stroke