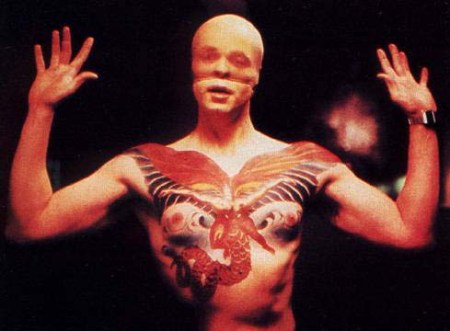 Vintage actor Tom Noonan began his acting career in the off-Broadway production of Buried Child.  At 6′ 6″ he was perfect for the part”menacing villain” and played that role Robo Cop 2, Last Action Hero, Manhunter, The Pledge and the role of Frankenstein in The Monster Squad.  The picture above shows a scene from the 1986 film Manhunter. Noonan’s first TV appearance was in an episode of Tales from the Darkside. From 2009-2001. he played Detective Victor Huntley on the series Damages which stars Glenn Close. He currently appears on the new Western TV series Hell on Wheels in the role of Reverand Cole.