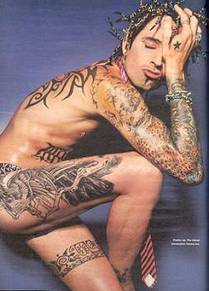 Tommy Lee was born as Thomas Lee Bass in Athens, Greece.  He is the founding member and drummer of the hard rock band Motley Crue.  Motley Crue has sold more than 80 million albums worldwide.  Lee left the band in 1999 to pursue a solo career.  In 2004 the four original band members reunited for a reunion tour, followed by the “Carnival of Sins” tour in 2005, and the “Route of All Evil Tour” in 2006.  The bands ninth studio album, “Saints of Los Angeles” was released in June of 2008.  There are plans to make a film, titled The Dirt, which is based on the band’s autobiography with a possible release date of 2011.