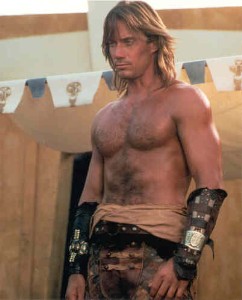 Vintage actor Kevin Sorbo sure has the body to play Hercules and he did.  In the early 1990s he starred in five made- for-TV movies such as Hercules and the Amazon Women, Hercules in the Underworld, and Hercules in the Maze of the Minotaur. The television series Hercules: The Legendary Journeys came next and ran for 111 episodes.  Sorbo’s other long running series was Andromeda in the role of “Captain Dylan Hunt”.  Sorbo recently completed the film Paradox, a sci-fi thriller based on the comic book series.