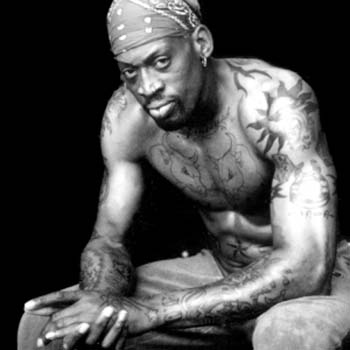 Flamboyant, erratic, Hall of Fame basketball player Dennis Rodman’s pro career lasted 14 years.  He played for the Detroit Pistons from 1986-1993, was signed by the San Antonio Spurs in 1993, was traded to the Chicago Bulls in 1995, was released by them in January of 1999, finished the season with the L. A. Lakers who then released him.  He signed with the Dallas Mavericks for the 1999-2000 series, played in only 12 games and was let go because of his erratic behavior.
Since then, Rodman has tried his hand at wrestling, acting, and writing.  He has published five books; Rebound: The Dennis Rodman Story, Bad As I Wanna Be, Walk on the Wild Side, and I Should Be Dead.