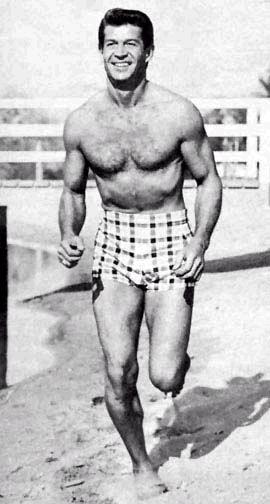 Although George Nader won a Golden Globe Award in 1955 as Most Promising Newcomer, the competition from male actors such as Rock Hudson and Tony Curtis made it difficult for him to land many leading man roles. In the late 50’s his homosexuality became known and ended his Hollywood career.  He and his companion moved to Europe and Nader found steady work in films. An unfortunate accident in the mid-70’s left his with an eye injury that made him extremely sensitive to the bright lights of movie sets.  He quit acting and began writing a series of science fiction novels.  His novel Chrome, written in 1978, is the first science fiction novel to be centered on a homosexual love affair. 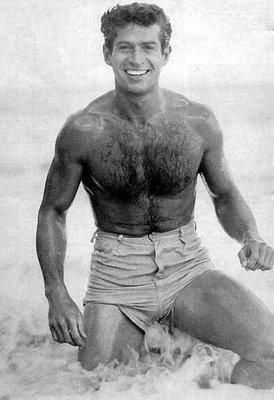 George Nader, born in Pasadena, CA was a film and television actor who won a Golden Globe Award in 1955 for Most Promising Newcomer.  He signed a contract with Universal Studios, however the studio already had several handsome, well-built male actors like Rock Hudson, Tony Curtin and Jeff Chandler, who overshadowed newcomer Nader.  He did appear in several films such as Carnival Story, Away All Boats, Phone Call from a Stranger, and as “Roy” the hero who saves the world in the low-budget 3-D sci-fi film Robot Monster. Nader also appeared in various role in several episodes of Fireside Theatre, Lux Video Theatre, and The Further Adventures of Ellery Queen. He was cast as “Dr. Glenn Barton’ in the adventure series The Man and the Challenge, and as “Joe Shannon” in Shannon.
When, in the mid 1950s it was discovered that Nader was in a homosexual relationship it ended his Hollywood career.  He and his companion, Mark Miller, moved to Europe, becoming the second most popular star in Germany.  In 1974, after sustaining an eye injury which caused extreme sensitivity to light and also developing glaucoma, George Nader retired from acting.