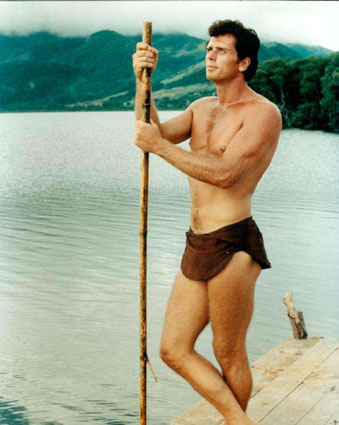 Ronald Pierce Ely, was born in Hereford TX.  He was the first TV Tarzan in the series which lasted from 1966-1968.  Prior to Tarzan, Ely had only small film roles and a co0starring role in the brief TV series The Aquanauts. The Tarzan series was the height of Ely’s career.  After the series ended he made guest appearances on many television shows such as Ironside, Marcus Welby, M.D., The New Adventures of Wonder Woman, a retired “Superman” in The Adventures of Superboy, and Renegade.  He also wrote two mystery novels; Night Shadows and East Beach.
In an interview Ely said. “Ever read the original Tarzan stories?  They’re beautiful.  About an educate man who returns to the environment he knows best, the jungle.  There he seeks truth, honor, and man’s lost humanity to man.  This Tarzan is the part I’ve been waiting for all my life.”  Hmmm…very interesting