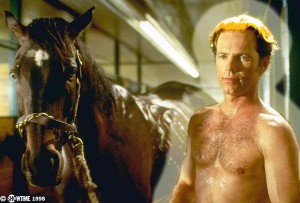 Bruce Greenwood is known for portraying U.S. presidents in Thirteen Days and National Treasure: Book of Secrets.  He is also known for his portrayal of Captain Christopher Pike in the 2009 film Star Trek. Other major movie roles were as Nick in Double Jeopardy, Lawrence Robinson in I, Robot, and Jack Dunphy in Capote.  He has the lead role in the 2012 TV series The River. Greenwood has done the voice of Batman in the animated video Batman: Under the Red Hood and in the TV series Young Justice.