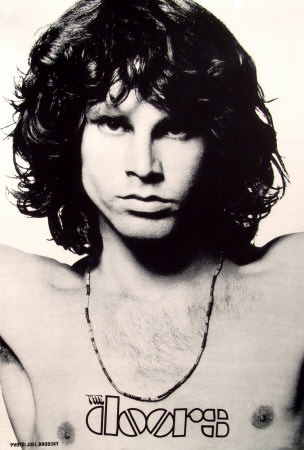 Jim Morrison was born James Douglas Morrison in Melbourne, FL and was the lead singer and lyricist of the  60s rock band The Doors.  Morrison was recognized to be one of the most charismatic frontman in the history of rock music.  The Doors debut album was the self-titled The Doors followed by other albums such as Strange Days, The Soft Parade, Morrison Hotel, and L. A. Woman.  After Morrison’s death in 1971 the remaining members of the band released two more albums before disbanding.
Although Jim Morrison was mainly known as a member of The Doors, he was also the author of several books of poetry.  They were titled The Lords and the New Creatures, Wilderness:  The Lost Writings of Jim Morrison, The American Night:  The Writings of Jim Morrison, and Light My Fire
Jim Morrison said of himself, “I think of myself as an intelligent, sensitive human being with the soul of a clown which always forces me to blow it at the most important moments.”  He also said, “Love cannot save you from your own fate.”  His life and death seem to acknowledge those sentiments