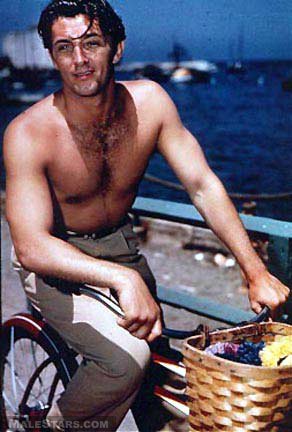 Robert Mitchum on a bike ride by the ocean

Robert Charles Durman Mitchum was born in Bridgeport CN and named by film critic Roger Ebert as his favorite actor and one of the greatest actors of all time.  He was cast as “Lt. Bill Walker in The Story of G. I. Joe. The film was instantly a commercial and critical success and launched Mitchum’s career.  Mitchum would become known for his roles in gangster and crime films.  He appeared in more than a hundred films.  Some of the best known were:  Blood on the Moon, The Red Pony, The Big Steal, Track of the Cat, Thunder Road, The Night of the Hunter, Home from the Hill, Cape Fear, The Longest Day and two films, Farewell My Lovely and The Big Sleep, based on author Raymond Chandler’s private detective “Phillip Marlowe”.  Mitchum  starred in three television mini-series: The Winds of War, North and South, and War and Remembrance.
A lesser known talent was his singing and composing ability.  Film makers used Mitchum’s own singing voice rather than hiring a professional singer in films such as Rachel and the Stranger, River of No Return and the Night of the Hunter.
Robert Mitchum was an actor of tremendous ability whose acting abilities were underrated and underused.  He hid his talent under an air of disinterest.  Mitchum said, “Sometimes, I think I ought to go back and do at least one thing really well.  But, again, indolence will probably cause me to hesitate about finding a place to start.  Part of that indolence perhaps is due to shyness because I’m a natural hermit.  I’ve been in constant motion of escape all my life.  I’ve never really found the right corner to hide in.” A  sad commentary from a man with so much talent.