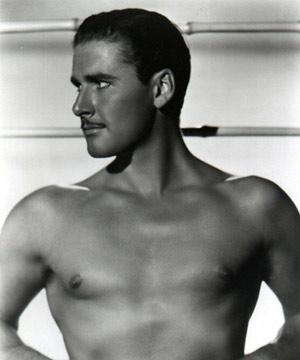 Errol Leslie Flynn was born in Hobart, Tasmania, Austriala.  His notorious behaviors began at an early age when he was expelled from almost every school he was enrolled in.  After some failed business attempts he left for the UK, and, in his early 20s, managed to get an acting job with the Northampton repertory company at the Royal Theater.  He then appeared as “Fletcher Christian” in the Australian film In The Wake of the Bounty. He  immigrated to the US as a contract actor for Warner Brothers studios and became an overnight sensation when he starred in Captain Blood.  He became known as the king of the swashbuckler films.  Captain Blood was followed by The Charge of the Light Brigade, The Prince and the Pauper, The Adventures of Robin Hood many other films of the same genre.
Off screen Errol Flynn was known for his love of drinking, fighting, womanizing and boating which quickly took its toll on his youthful good looks, causing his career to dwindle.  In his later years he was mainly case as aging alcoholics such as “Mike Campbell” in the film version of Ernest Hemingway’s novel The Sun Also Rises and as “John Barrymore” in Too Much, Too Soon, roles that were almost mirror images of Flynn himself. He is quoted as saying, “I intend to live the first half of my life.  I don’t care about the rest.”  Errol Flynn was dead of a heart attack at the age of 50.