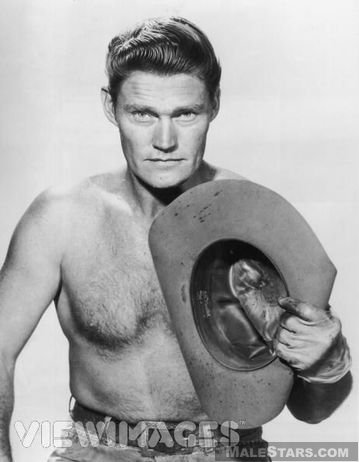 Kevin Joseph Aloysius Connors was born in Brooklyn, NY.  At 6’5”, and with natural ability, Connors joined the Boston Celtics, playing center, but, because baseball was his first love, he left the Celtics for spring training with the Brooklyn Dodgers.  He played for in the minor leagues before briefly playing for the Dodgers.  He had a short career playing for the Chicago Cubs before being spotted by an MGM casting director who recommended him for a small part in the Spencer Tracy-Katherine Hepburn film Pat and Mike.
Connors did appear in some feature films but was best known for his work on television.  He had roles in shows such as the Schlitz Playhouse of Stars, Four Star Playhouse, Wagon Train and Zane Grey Theater before landing the role of “Lucas McCain” on The Rifleman.  The show ended after five seasons and Connors then played “Atty. John Egan” on Arrest and Trial and “Jason McCord” on Branded.
Although busy with his acting career Chuck Connors found the time to pursue 10 hobbies: golf, horse riding, reading, swimming, fishing, poetry writing, spending time with his family, baseball, philanthropy and politics