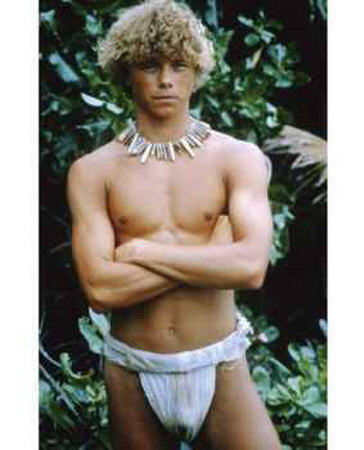 Christopher Atkins Bomann was born in Rye, NY.  He wasn’t interested in acting until an agent he knew talked him into auditioning for The Blue Lagoon.  He won the role of “Richard” over 4,000 others who also auditioned.  The film, co-starring Brooke Shields, was an enormous success grossing over $58 million with a production cost of just $4.5 million.  He then starred, along with Kristy McNichol in The Pirate Movie, again appearing shirtless, which would become a recurring theme for him as an actor. In 1982 he was on the cover of Playgirl Magazine and later in the year posed nude for the magazine.  Atkins appeared as “Peter Richards” in one season of the prime time soap Dallas.  It became impossible for him to distance himself from his character in Blue Lagoon and during the 1990s and 2000s he appeared in several made for TV and cable films like Fatal Charms, Angel Flight Dawn, and Caved In. His most recent work was in the film Exodus Fall which starred Jesse James and Rosanna Arquette followed by a starring role in the drama Stained Glass Windows.