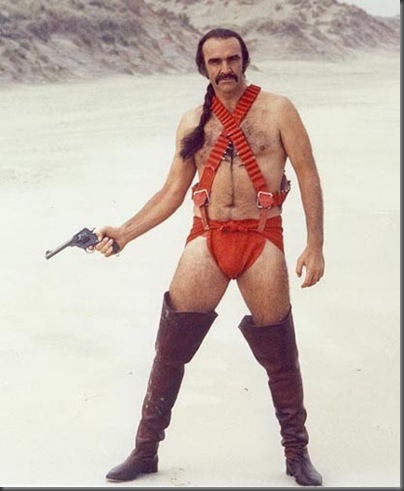 Connery, born Thomas Sean Connery in Edinburgh, Scotland,  is undoubtedly best known for his role as “Bond, James Bond”.  He was the definitive 007 and did seven Bond movies from Dr. No to Never Say Never Again. Connery appeared  in many other excellent  films such as:  The Wind and the Lion, The Man Who Would Be King, The Untouchables, Indiana Jones and The Last Crusade, The Hunt for Red October,and The Rock.
What was he thinking when he accepted the role of “Zed”.  Evidently, Queen Elizabeth II is very forgiving or was completely unaware of Zardoz, because in July of 2000 he was knighted and became Sir Thomas Sean Connery.

Paul Newman Shirtless in a scene from Sweet Bird of Youth

Paul Newman, born Paul Leonard Newman in Shaker Heights, Ohio, was handsome, sexy, talented and a great humanitarian.  Oh, and a race car driver and the owner of the most magnificent blue eyes to every gaze at you from the silver screen.
In an acting career that spanned  more than five decades he played in dozens of memorable films.  Who could forget”Brick Pollitt” in Cat on a Hot Tin Roof, “Eddie Felson” in The Hustler, “Chance Wayne” in Sweet Bird of Youth, “Luke” in Cool Hand Luke”, “Butch” in Butch Cassidy and the Sundance Kid , “Henry Gondorff” in The Sting, and so many more.  One of his last performances was the voice of “Doc Hudson” in the animated film Cars.
Newman was everything you could ask for and so much more! 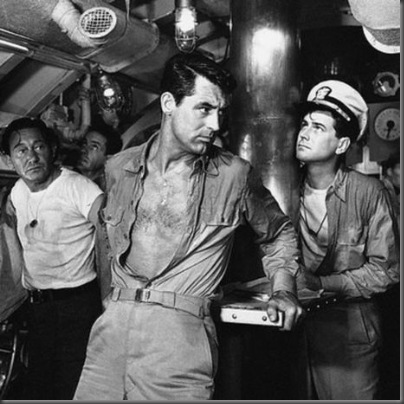 A shirtless Cary Grant in a scene from Destination Tokoyo

Cary Grant, was born Archibald Alexander Leach, (REALLY) in Bristol England.  He was the epitome of class; charming, elegant, sexy and funny.  He was named the second Greatest Male Star of All Time by the American Film Institute.
Grant’s performance in the film, The Philadelphia Story, opposite Katherine Hepburn and James Stewart  established his most familiar on screen personality, that of the “charming if sometimes unreliable man, formerly married to an intelligent and strong-willed woman who first divorced him, the realized that he was-with all his faults-irresistible”.
Of course, there were also all those Hitchcock films such as: Notorious, To Catch a Thief, and North by Northwest.  Alfred Hitchcock, who was well-known for disliking actors, said that Grant was “the only actor I ever loved in my whole life”.  Really.  What’s not to love about Cary Grant.