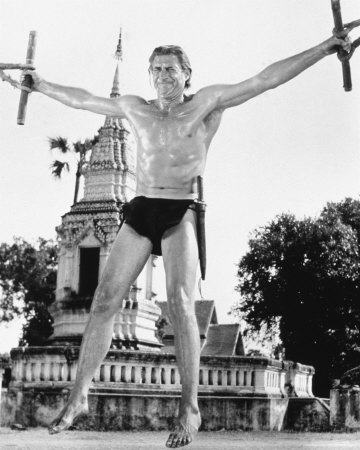 Jacques O’Mahoney was born in Chicago, IL.  After moving to Los Angeles he became a stuntman doubling for actors such as Gregory Peck, Errol Flynn and John Wayne.  His first on-screen acting roles were in Three Stooges films where Columbia Studios spotted his acting skilled and gave him starring roles in adventure serials.  Mahoney eventually landed roles in three Tarzan films.  He played villain “Coy Banton” in Tarzan the Magnificent and the main character in Tarzan Goes to India and Tarzan’s Three Challenges.
In addition to the Tarzan films, Mahoney appeared in many films and in television episodes of shows such as Wagon Train, 77 Sunset Strip, Kung Fu, and B. J. and the Bear.  He was stepfather to actress Sally Field and appeared with her in the comedy film The End.