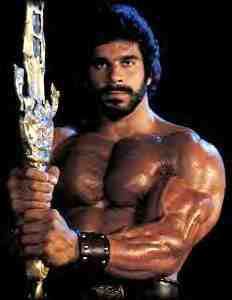 Not surprising that Lou Ferrigno would be cast as the “Incredible Hulk”, a role he played for five seasons in the TV series and several made-for-television movies.  Ferrigno appeared in the 2010 film Soupernatural and is at work on a comedy/drama film titled City of Shoulders and Noses.