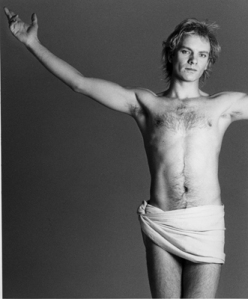 Gordon Matthew Thomas Sumner, whose stage name is Sting, was born in Wallsend, England.  The name Sting came from a black and yellow sweater he wore onstage that, according to bandleader Gordon Soloman, made him look like a wasp.  In the late 1970s Sting, Stewart  Copeland and Henry Padovani (soon to be replaced by Andy Summers) formed the New Wave Band The Police.  Five of their albums reached the top of the charts and won six Grammy Awards.  Their album Sychronicity included Every Breath You Take which was the most successful song the band ever recorded.
Sting his first solo performance in September, 1981.  He performed on all four nights of the fourth Amnesty International benefit “The Secret Policeman’s Other Ball.  He performed Roxanne, Message in a Bottle and his own arrangement of Bob Dylan’s I Shall Be Released.  His first solo album was “The Dream of the Blue Turtles” which included the hit single If You Love Somebody Set Them Free.  Sting left The Police in 1983 and continued a solo career.  Combining both his performances with The Police and his solo career, Sting has received sixteen Grammy Awards.
He has also done some acting.  Film credits include the role of “Feyd-Rautha Harkonnen” in the 1984 sci-fi film Dune.  Sting was quoted as saying, “My job is being a musician.  I just make films for fun, really.”