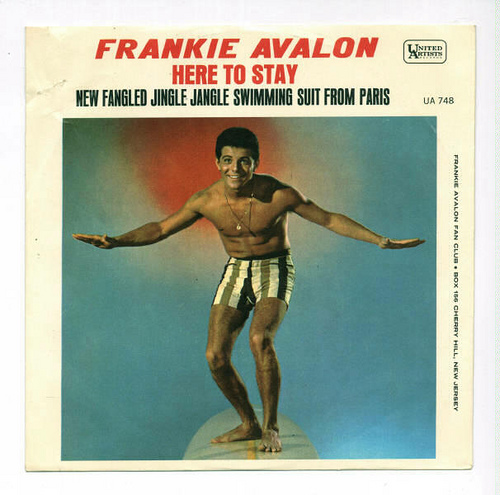 Frankie Avalon, whose birth name is Francis Thomas Avallone, was born in Philadelphia, PA.  He was a teen idol singer who had 31 charted Billboard singles in the late 50s and early 60s.  They included Venus (5 weeks at #1), Why (which was the last Billboard #1 singles of the 1950s), Just Ask Your Heart, I’ll Wait For You, Bobby Sox to Stockings and A Boy Without A Girl.
During the 1960 he and former Mousketeer Annette Funicello were teamed up in several “beach” comedy films.  The first was Beach Party. Others were Beach Blanket Bingo, and Muscle Beach Party.
In 2009 Frankie Avalon performed his 1959 #1 hit Venus on American Idol as a tribute to Simon Cowell’s 1959 birth year.