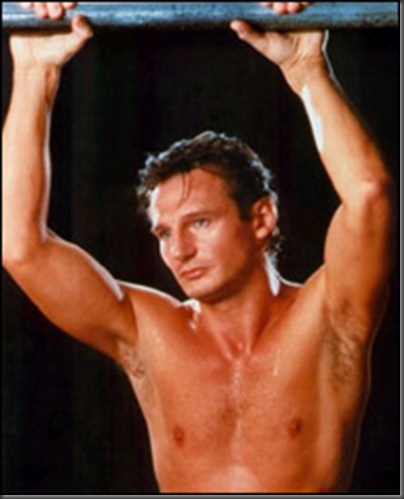 Liam Neeson was born William John Neeson in Northern Ireland.  He has appeared in several blockbuster films often playing roles based on real people such as “Oskar Schindler” in Shindler’s  List, Irish leader “Michael Collins” in Michael Collins, pioneer in human sexuality research “Alfred Kinsey” in Kinsey.  Neeson has played “Henri Ducard” in Batman Begins and “Bryan Mills” in the crime drama Taken.  His most recent roles are as “Hades: in Clash of the Titans to be released in March of 2010, and as “Col. John ‘Hannibal’ Smith in the film version of the popular television series The A-Team.
Liam Neeson said, “Some mornings you wake up and think, ‘Gee, I look handsome today.’ Other days I think, ‘What am I doing in the movies’?  I wanna go back to Ireland and drive a forklift.”  Please don’t do that!