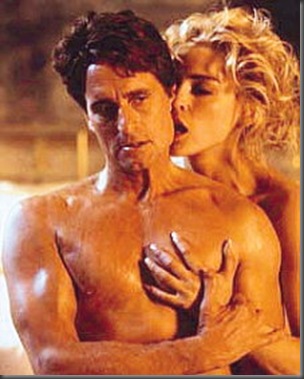 Yesterday Kirk Douglas.  Today, his son Michael Douglas, who was born as Michael Kirk Douglas in New Brunswick, New Jersey.  Michael Douglas first came to public attention as Karl Malden’s partner in the television series The Streets of San Francisco. The series lasted for four years and from then on Douglas appeared on the big screen.  His acting credits include the Oscar nominated film China Syndrome which starred Jack Lemmon and Jane Fonda, Romancing the Stone with Kathleen Turner, the chilling thriller Fatal Attraction co-starring Glenn Close, Wall Street for which he won an Oscar as Best Actor in a Leading Role.  More great films are:  comedy/thriller The War of the Roses, another film with Kathleen Turner,  the steamy and suspenseful Basic Instinct with Sharon Stone, The Game, Don’t Say a Word, and Beyond a Reasonable Doubt. Douglas will again appear as “Gordon Gekko” in a  sequel to Wall Street:  Wall Street 2: Money Never Sleeps.
According to Michael Douglas:  “The exciting thing about making movies today is that everything is up for grabs.  And you had better grab.”  Well, Michael Douglas, you really grabbed some great ones!