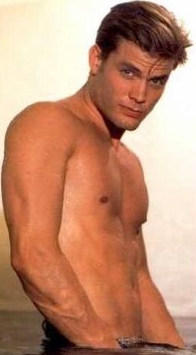 New picture of Casper Van Dien.  In this one his hair shorter but his body is still sensational.  He played “Tarzan” in Tarzan and the Lost City, and appeared in the three Starship Troopers films.  Watch for him in a TV film called The Dog Who Saved Chirstmas Vacation to be released on December 12, 2010.