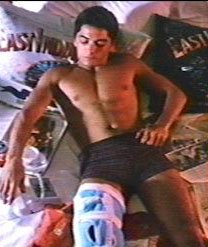 Scott Vincent James Baio was born in Brooklyn, NY. His acting debut was in the film Bugsy Malone a musical comedy where the gangsters were children and the “bullets” they use are splurge gun0s that cover victims in cream.  His co-star was Jodie Foster.  He and Foster worked in another film titled Foxes.  Although Baio worked in several films and television series he is best known as “Charles ‘Chachi’ Arcola” in Happy Days and the spinoff Joanie Loves Chachi.  He played another “Charles” in Charles in Charge. More recently Scott Baio was the host on the reality TV show Confessions of a Teen Idol.