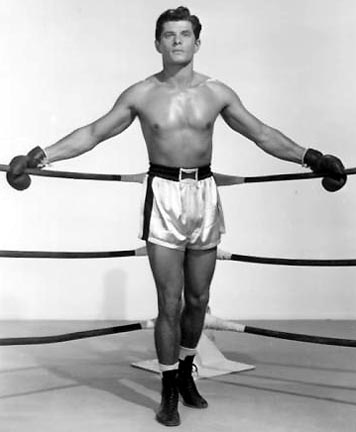 Dewey Martin, was born in Katemcy, TX.  Although he worked with several successful Hollywood stars such as Humphrey Bogart, Van Johnson, Audie Murphy, and Kirk Douglas, Martin never became a big star himself.  He was uncredited in the first film he appeared in which was Knock on Any Door starring Humphrey Bogart.  Another uncredited role was in a film starring Van Johnson called Battleground.  He went on to co-star with Kirk Douglas in The Big Sky,  appeared as “Ensign Kenneth Schecter” in another film starring Van Johnson titled Men of the Fighting Lady, and in The Desperate Hours, again, with star Humphrey Bogart.
He turned to television and worked in dozens of series episodes such as The Twilight Zone, The Outer Limits, Death Valley Days, Hawaii Five-O and Police Story.