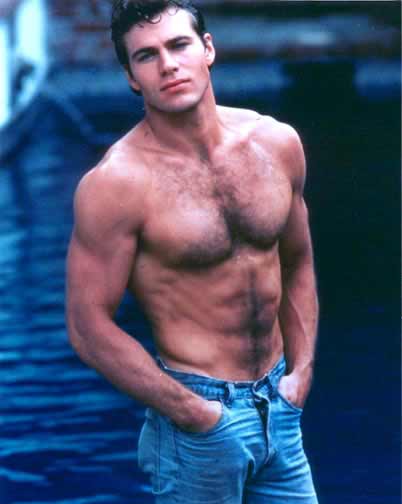 Ruggedly handsome, sexy Jon-Erik Hexum  was discovered by Bob LeMond (John Travolta’s manager) and was thought to be the next big male star.  His first major appearance was in the role of “Phineas Bogg” in the short-lived adventure series Voyagers.  He was then cast as “Mac Harper” in the television drama series Cover Up.  During a break in the day’s shooting of the show, Hexum jokingly put a prop .44 magnum to his temple and pulled the trigger.  Although the gun was loaded with “blanks” the force of the wad hitting his temple caused  enough blunt force trauma to propel a small piece of his scull into his brain causing massive hemorrhaging.
Hexum  underwent five hours of surgery in an attempt to repair the damage, but was declared brain dead after five days on life support.  His mother allowed his body, which was still on life support, to be flown to San Francisco for organ donation.
Jon-Erik Hexum’s untimely and tragic death ended a career that had started with tremendous  promise.