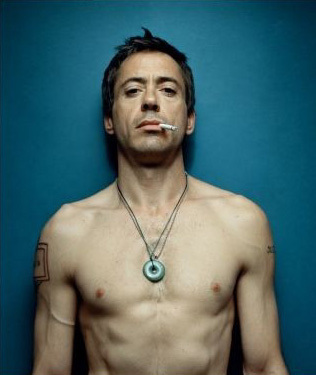 Don’t know how many people are aware that Robert Downey, Sr. was a underground film maker who admits to giving his daughter, Allyson, and son Robert, drugs at a prepubescent age.  Sure could explain Robert’s drug addiction and the long road he had to take to get clean. His frequent arrests made headlines and tended to make people forget that he was, and is, a good actor.  He seems to have turned his life around.  Being cast in the Iron Man films revived his career and garnered him rave reviews and several year end awards from film critics and film associations world wide.  He starred as Tony Stark/Iron Man in the 2010 sequel and will, again, in Iron Man 3 which will be released sometime in 2013.  Also, watch for Tony Stark/Iron man to appear in The Avengers, another superhero film with an all star cast.
It’s great to see a talented actor who hit a really low point in his career make a comeback the way Robert Downey, Jr. has!