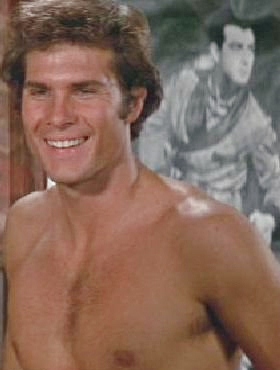 Thought at the time to be headed for stardom, Roger Herren’s star burnt out very quickly.  The handsome young man, oozing southern charm, had only one acting credit.  He landed a role in the 1970 film Myra Breckenridge.  The film was based on the controversial (for the 70s, anyway) novel by Gore Vidal, who in 1945 shocked and outraged the American public and critics when he wrote the novel The City and the Pillar.  The outrage was caused by Vidal’s subject matter (homosexuality) and the way he handled it (unambiguously).
But, back to Roger Herren.  He had a fairly major role in Myra Breckenridge but was never seen again.  Curious.  Unless, of course, his charm and good looks couldn’t outweigh a lack of acting ability.