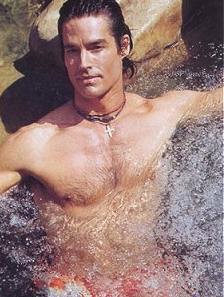 Through the years, Ron Moss has made appearances in episodes of TV series’ such as Trapper John, M.D. and Six Feet Under as well as role in the films Hot Child in the City, The Alternate, and Christmas in Love.  However, he has been a mainstay on the soap The Bold and the Beautiful since 1987.  His role is Ridge Forrester.