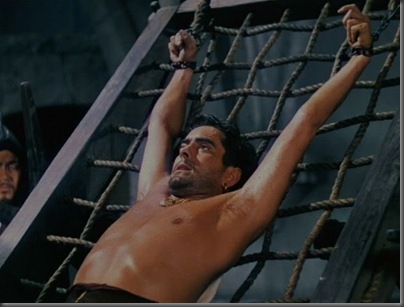 Tyrone Power tied up in a scene from The Black Swan.

Tyrone Edmund Power, Jr., born in Cincinnati, OH, was famous for playing “swashbuckler” roles in films such as The Mark of Zorro, Blood and Sand, The Black Swan, Prince of Foxes, The Black Rose and Captain from Castile.
He actually hated the romantic, swashbuckling roles and wanted to do films and plays that had something to say.  He did appear in leading roles in more substantial films such as the Academy Award nominated This Above All, as famous pianist and band leader Eddy Duchin in The Eddy Duchin Story, opposite Ava Gardner, in The Sun Also Rises, based on Ernest Hemingway’s novel.  Tragically, halfway through the shooting of Solomon and Sheba, Tyrone Power collapsed during a dueling scene and died of a heart attack.  He was 44.
”I’ve done a lot of stuff that is a monument to public patience” said Tyrone Power. On the other hand,  you also did a lot of stuff that was a monument to public entertainment