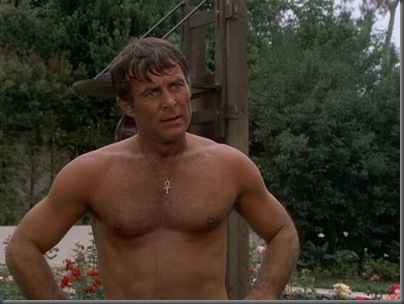 A shirtless Robert Conrad seems to be asking: “Is there a problem”?  No.  Not for us!

Robert Conrad, whose birth name was Konrad Robert Falkowski, was born in Chicago, IL.  He may be best known as the character “James T. West” on the television series The Wild  Wild West. Conrad did most of his own stunt work on the show, and while performing a stunt, he slipped and fell head first onto a concrete floor 12 feet below.  His recuperation took so long it delayed the show’s production for almost three months.
Robert Conrad is also well know for his role as “Maj. Greg ‘Pappy’ Boyington” on the series Baa Baa Black Sheep.  In addition to working in TV series, he has appeared in many made-for television movies including Five Desperate Women,  The Wild Wild West Revisited, More Wild Wild West, Glory Days, and the mini-series Centennial.
Robert Conrad was married to his first wife when they were both teenagers, eloping and living under an assumed name so their parents wouldn’t be able to find them.  They finally let their parents know about the marriage when his wife became pregnant thinking that it would be too late for the marriage to be annulled.  When asked how he would feel if his daughter was to marry as a teenager he replied;  “If some sixteen-year-old punk were to come to me and say, ‘Sir, I want to marry your daughter,’ I’d say ‘Fine’ and escort him to an analyst.  The average boy that age isn’t remotely capable-from any point of view, including the emotional-of supporting a family.”  That certainly sounds like the outspoken Robert Conrad we all know!