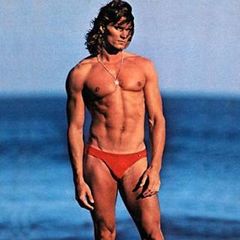 Miles O’Keeffe got his first big acting break when he landed the role of Tarzan in the 1981 film Tarzan, The Ape Man. The film starred Bo Derek as Jane. His next several  appearances were in adventure/fantasy films such as Ator, the Fighting Eagle, The Blade Master, Sword of the Valiant, and Iron Warrior. O’Keeffe’s last film role was as Ed Janzer in the 2005 thriller The Unknown.