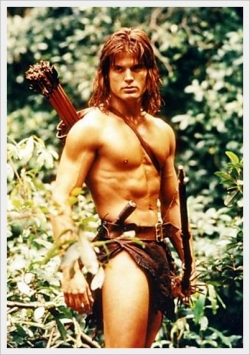 With a body you could gaze upon forever,Casper Van Dien played a more recent Tarzan in the 1998 film Tarzan and the Lost City.  His breakthrough role came before the Tarzan film when he played “Johnny Rico” in the sci-fi film Starship Troopers.  He continued the role in Starship Troopers 2: Hero of the Federation, and Starship Troopers 3:  Marauder.  He was also part of the all star cast of Sleepyhollow which featured Johnny Depp and Christina Ricca and just completed a made-for-TV film Turbulent Skies in the lead role of “Tom”.