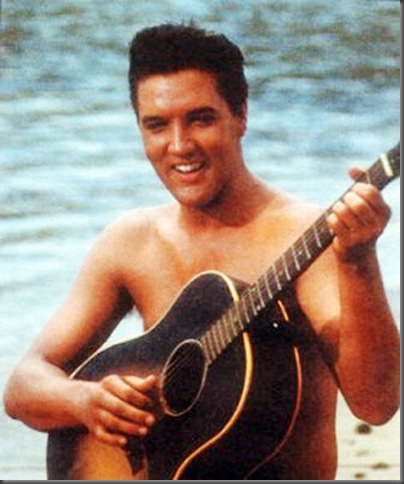 Shirtless Elvis Presley has me All Shook Up!

Elvis Aaron Presley, The King of Rock and Roll, was born in Tupelo, MS.   Sales of his recordings number between 600 million and one billion,  making him one of the best selling solo artists in popular music history.  Elvis Presley had 94 Gold singles, 40 Gold albums and starred in films that grossed more than $180 million.  He was the only performer to be inducted into three music halls of fame:  The Rock and Roll Hall of Fame, The Country Music Hall of Fame and the Songwriters Hall of Fame.  His style changed the face of rock and roll forever.
Elvis Presley said:  “I want to entertain people.  That’s my whole life.  To my last breath”.  And he most certainly did.