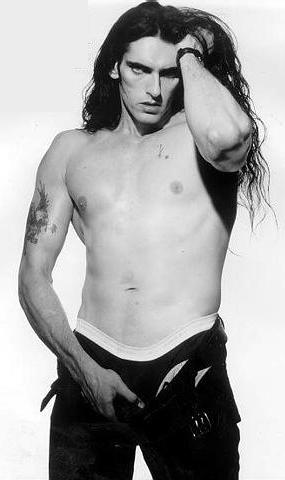 Peter Steele, born Petrus T. Ratajczyk in Brooklyn, NY, was the lead singer, bassist and composer for the gothic metal band “Type O Negative”.  Steele and band members Josh Silver, Kenny Hickey and Johnny Kelly, combined gothic, doom and thrash metal elements with lyrics that emphasized themes of romance, depression and death.  They were nicknamed “The Drab Four” (as a tribute to the Beatles “Fab Four nickname).
Peter Steele posed for the nude centerfold of Playgirl Magazine in August of 1995 claiming he did it as a naïve publicity stunt.  In 2005 Type O Negative posted a picture of a tombstone with Steele’s name and the dates 1962-2005 starting rumors that he had died.  The band said this was also a publicity stunt to celebrate their signing with SPV Records.  Five years later Peter Steele did, indeed, die of heart failure at the age of 48.  In a 2007 interview with “Decibel” magazine Steele explained his recent change from atheism to identifying himself as a Roman Catholic.  He stated, “There are no atheists in foxholes, they say, and I was a foxhole atheist for a long time.  But after going through a midlife crisis and having many things change very quickly, it made me realize my mortality.  And when you start to think about death, you start to think about what’s after it.  And they you start hoping there is a God.  For me, it’s a frightening thought to go nowhere.”