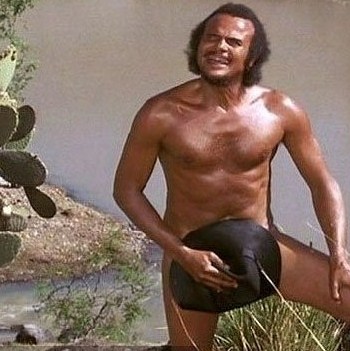 What are you hiding behind that hat Harry?

Born in New York City, Harold George Belafonte was given the title “King of Calypso”.  His first single, Matilda, became his signature song with the audience participating in the chorus of the song in all of his live performances.  Another song always associated with him is The Banana Boat Song.  During his music career Belafonte released 33 solo albums and 8 collaborations.
Belafonte also pursued an acting career.  He starred in Carmen Jones with Dorothy Dandridge and Pearl Bailey, Island in the Sun, Buck and the Preacher opposite Sidney Poitier, the comedy Uptown Saturday Night with Sidney Poitier and Bill Cosby, and with John Travolta in White Man’s Burden.
Harry Belafonte has been awarded six Gold Records, two Grammy Awards, the Kennedy Center Honors, the National Medal of Arts, a Grammy Lifetime Achievement Award and an Emmy Award for his solo TV special Tonight with Belafonte.